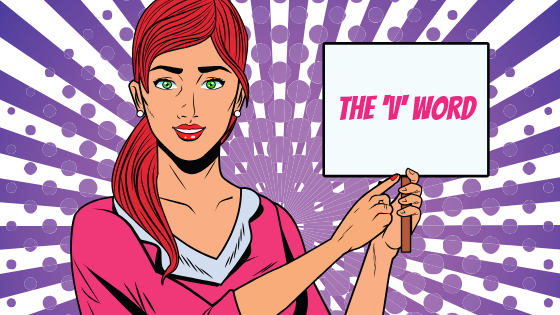 We need to talk about the ‘V’ word.

VAGINA. It’s one of the words that people have trouble saying out loud, let alone having a conversation about it. I wasn’t going to even mention the other ‘V’ word—vulva- but the writer in me decided it needed to be here too.

Both words are actually medically accepted nouns that refer to body parts of females. They’re even in the dictionary FFS!

In the last 10 years or so I’ve gotten used to saying “vagina”… I’m working on “vulva”. They’re not words that pop into conversation easily unless you’re a gynaecologist or obstetrician.

Last year I went to a women’s event. It’s always a hoot. My favourite part was when someone produced a bunch of stickers and t-shirts that said “Dance Like Your Vagina’s On Fire”! ???Talk about heralding in a new era of mid-life awesomeness. I love women. I especially love mid-life women: those gals will say anything. ♀

After that weekend I started thinking about the fact that we need to listen to what’s on our mind, in our heart and maybe make a note of our menopausal symptoms. They’re actually coming from our body… she’s done a great job getting us this far.

So, have you noticed a decrease in sexual desire?

So here’s the down-low (get it?! down-low)… in addition to all the other cray-cray stuff that’s happening to all of our nooks and crannies, we’re suddenly confronted with our sex lives potentially heading south as well. WHAAAATTTT?!?!?!?

Here’s a list of some of the ‘fun’ (not fun) experiences you too can experience in your nether-regions:

It’s difficult to determine the cause of sexual problems without knowing that sexual function is complex. When you’re 20, 30 or even 40 it doesn’t seem that complex. By the time 50 rolls around, let’s just say it gets complicated.

Some of the causes and comorbid conditions (things that occur together) are:

It’s important to note that during any part of menopause, with all of the changes we experience, a woman’s libido may go underground for a while. It’s as if we need to re-prioritise our lives.

This is perfectly normal apparently. And it can be temporary. I’m told that there’s no reason for diminished sex drive to become permanent after menopause. And, while some women truly do notice a decline in libido at menopause, others actually experience heightened sexual desire and activity after menopause (Who are these women? We need to interview them immediately).

And now for a spot of bad news. Vaginal atrophy.

I’ll just let that sink in for a minute.

It’s estimated that up to 60% of post-menopausal women suffer from vaginal atrophy.  OMFG. SIXTY PERCENT. 60%.

Due to embarrassment or some other silliness we think up, many women just don’t feel comfortable speaking to their doctor about their sex lives.

So we button up and suffer in silence.

So what is vaginal atrophy?

Vaginal atrophy (also known as atrophic vaginitis) is caused when there is thinning, drying and inflammation of the vaginal walls. It’s often attributed to a decline in estrogen and occurs most often after menopause. It can start as early as a woman’s late 30s (seriously crying now ??)!

Vaginal atrophy is considered to be a chronic and progressive condition that can affect the quality of life for women and their partners. Symptoms can include:

Sounds like the end of my life as I knew it ??

There’s good news though: we can get treatment for vaginal atrophy

Vaginal atrophy is a common condition that is easily treated.  The two best ways to treat this condition is to use a vaginal moisturiser and have more sex! Yaaayyyy ???

When it comes to choosing a vaginal moisturiser, there are options.

If you’ve read this far without fainting… then congrats!

If you have any of the terrifying things described above let us know in the comments below.

We’ll send prayers and digital chocolate too if it existed. ??

Who knows we might start a band: Princess vulva and the vagina sisters!

Have you ever wanted to be in a band? Are you a raging mad woman? Get the midnight to 6:30am sweats?

Warning: Sharon’s F-bombs pop-in here and there… but they’re kept to a minimum. ?